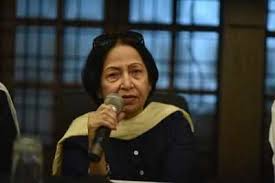 Usha Khanna (born 1942 in Gwalior) is an Indian music director. Regarded as the only established female music director in the Indian film industry, she remained active for more than 3 decades from 1960s to 1980s. She is still active making some music for some movies and television-serials, more than 40 years after her debut as music director in Dil Deke Dekho (1959). She received a Filmfare nomination for composing the songs for the huge hit film Souten (1983).

The popular music director O. P. Nayyar introduced Usha Khanna to meet Sashadhar Mukherjee, a powerful man in the Indian film industry at that time. She sang a song for Mukerji, and when he realized that she had composed the song on her own, he told her to compose two songs per day for one year. After a few months, Mukherjee signed her as the composer for his movie Dil Deke Dekho (1959) as a music composer. The film, which also introduced the actress Asha Parekh, became a big hit, and Mukherjee hired her again for another Asha Parekh starrer Hum Hindustani (1961).

Saawan Kumar was often the lyricist for Usha Khanna, and wrote most of his lyrics for her songs. He directed and produced the lyrics for eleven movies she scored the music for. In 1979 K J Yesudas received Filmfare award for her song Dil ke tukde tukde in the film Dada.

Usha Khanna was quite active as a composer until the mid-ninetees. Until now, the last movie she has given music to was in 2003. The movie was Dil Pardesi Ho Gaya, produced and directed by her ex-husband Saawan Kumar who she was briefly married to.