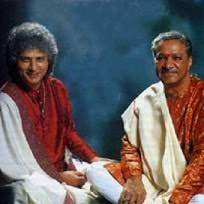 Is an Indian music composer and santoor player from the state of Jammu and Kashmir. The santoor is originally a folk instrument, but became an instrument for Indian classical through his internationally recognized playing style.

is an Indian music director and classical flautist, who plays the flute, in the Hindustani classical tradition.

Shiv-Hari refers to the Indian music director duo of Shivkumar Sharma, a Santoor player, and Hariprasad Chaurasia, a flutist. The duo has worked on Indian classical music pieces as well as Indian movie scores.

As early as 1967, Shiv-Hari went on to record the album titled Call of the Valley. With the active participation of guitarist Brij Bhushan Kabra and the unusual way in which this Indian classical music album was organized, the result was a fresh, edgy, and slightly controversial form of music. The innovative use of the guitar on the album made it popular among people from Western countries. It is still one of the most successful albums of Indian classical music ever recorded.

They composed music for eight Hindi films, and they are super hit movies under the banner of Yashraj Film and A. Nadiadwala.. Name of the films are,,,,,,,

They got Filmfare Award for the following films,,,,,,,,