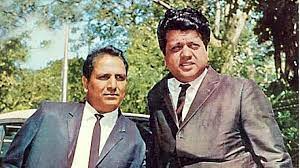 Shankar Jaikishan(SJ),  is a duo musical composer in Bollywood who dominated the film industry for three decades. It is an unusual story of two classical musical composers who got united together as they had a personal liking for each other. Although Shankar Singh was born in Telangana and Jaikishan in Gujarat, they met each other in Mumbai in Prithvi Theatres (then run by Prithviraj Kapoor). Both were working as music composer for the plays that were staged in the drama company, Prithvi Theatres.

Before joining Prithvi Theatres, Shankar learnt Tabla from the nuances of Baba Nasir Khansahib and Jaikishan learnt harmonium from Visharad Wadilalji. They became experts in musical training. While they were part of the drama company, they came across Raj Kapoor and thus Raj-Shankar-Jaikishen duo became popular in Bollywood. Raj Kapoor gave a chance to Shankar Jaikishan as an assistant music composer for his film ‘Aag’ (1958). The original musical score for this movie was composed by Ram Ganguly.

The duo worked as ‘house composers’ for RK (Raj Kapoor) Films and were on their payroll until the end.

Shankar Jaikishan has a good pairing with Shailendra and Hasrat Jaipuri, who featured in every film of R.K. Banner.

Although the composers used a variety of ragas in their compositions, ‘Raga Bhairavi’ was the most preferred note in every best musical score.

Semi-classical music is notable in the duo’s songs including `Jhanak-Jhanak Tori Baje Payaliya' (Mere Huzoor), `Koi Matwala Aya mere Dware' (Love in Tokyo) and `Chham Chham Baje Re Payaliya' (Jane-Anjane), (which are popular even today). It was after the film ‘ Sangam ’ there was a split in the duo. However, Mohammed Rafi settled their ego and had brought them together in many films.

The duo has worked with singers like Mohammed Rafi, Lata Mangeshkar , Manna Dey , Mukesh, Talat Mehmood and Asha Bhosle but had given maximum melodious hit duets with the duo of Lata-Rafi, Lata-Mukesh, and Lata-Manna for music lovers. Even Manna Dey felt that he could sing for Raj Kapoor only because of Shankar Jaikishen. The duo was honoured with Padma Shri by the Government of India in 1968.