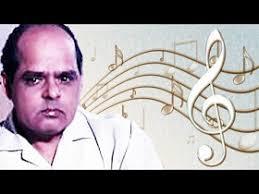 He came to Mumbai to pursue his career as a music director, in 1948. Struggle followed before he met Kidar Sharma.

In those days Kidar Sharma was making Neki Aur Badi and whose music was being looked up by music director Snehal Bhatkar. But, Kidar was so impressed by Roshan that he took him for his film after discussing the matter with Snehal Bhatkar.

Roshan composed the music for Neki Aur Badi (1949), unfortunately the film was a flop. Inspite of the result Kidar offered Roshan his next venture Baawre Nain (1950).

Roshan started freshly with the new assignment, this time he broke through with hits like 'Khayalon Mein Kisike..', 'Sun Bairi Balam..' and others.

His biggest strength was that he was very comfortable in mixing the folk music with the complex classical tunes.

He used to make a fusion of folk and classical music and that too with ease. This was the speciality which belonged to Roshan only.

It was his approach which made his music stand out from the others.