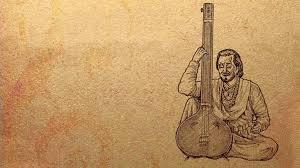 Parichay (Introduction)
Megh Mallhar, a raga of considerable antiquity, is associated with the rainy season, and is considered a serious and profound raga, prescribed for performance around midnight.
In this sense, this raga may be considered to represent the sombre, and even awesome, facet of the advanced monsoon (July-August), in contrast with Miyan ki Malhar and other Mallhar variants, which are explicitly euphoric at the onset of the rainy season (June-July), and the imminent relief from the scorching Indian summer.
_____