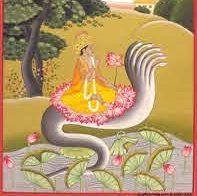 Unlike Bhairav, this rag is performed in the last part of the night. There has been a strong tendency over the last few decades to take lighter interpretations of both Kalingada as well as Bhairav.

The result is that the two ragas have begun to converge.

Whenever there is such a convergence, the general tendency is for ragas to asume the name of Bhairav. If this tendency continues, we can expect Kalingada to completely merge with Bhairav and to lose its identity in the process.

The structure of Kalingada is very simple.

It is a sampurna - sampurna rag performed in a very straight manner.