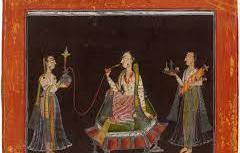 
Raga Information:
Raga Bhupali, also known as Bhupa, is a common evening raga describing melancholy.
It is believed to be named “Bhupali”, as the raga comes from the Bhupa area, which is near India and China. Hence, music from China, Bhutan, and Nepal all seem to have that melodic shape in their melodies.
Raga Bhupali is sometimes confused with Raga Desakara, since the ragas both use the exact same swara set.
Desakara, however, has a different swarupa, which causes it to be a different raga.
The focus of this raga is on the first half, or the purvanga, while Desakara focuses on the second half or the uttaranga.
What harmonium players tend to do to differentiate this raga is to use a chord of D, S, and G to give Bhupali its unique flavor.
_____