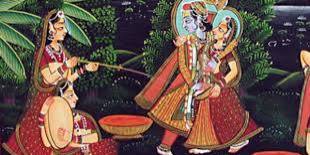 
Raga Bahaar has its origin in Kafi Thaat. In this Raga, as Re in Aaroh and Dha in Avaroh are prohibited, its class is believed to be Shaadav – Shaadav (षाडव-षाडव). In this Raga, Komal Gandhaar and both Nishad are sung. Here, Ma is Vaadi (वादी) and Saa is Samvadee (सम्वादी).

This Raga hasn’t been mentioned in any of the ancient scriptures. Thus, it can be believed that this Raga was formed in post- historic period. Great scholar of Indian classical music Shri. Bhatkhande mentions in his fourth curriculum book that बागेश्वरी मल्हार सुम्मिलत…सुर अडाना बीच चमकत…

In Raga Bahar, group of swaras सा म and ग म ध from Bageshwari, नि ध नि सां, नि प and ग म रे सा from Malhar and नि सां, रे सां नि प from Adana have been blended. This Raga is sung in the later half of the musical piece. Its chalan is more powerful in the later half of Madhya Saptak and Taar Saptak. We can concentrate our attention on its Aalaap as its example. With regard to सम्वादी-वादी also, this Raga is sung in the later half. Its वादी swar ‘Ma’ is the part of later half. Though, the ideal time for singing Raag Bahar is midnight, yet this is sung and played in every hour in the season of spring (Basant Ritu) .