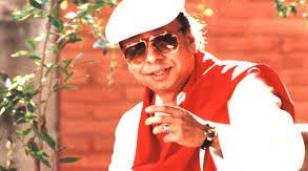 27 June 1939, Kolkata To 4 January 1994 Mumbai
​
R.D.Burman was born to the Bollywood composer and singer, Sachin Dev Burman, and his lyricist wife Meera Dev Burman. Initially, he was nicknamed Tublu by his maternal grandmother, although he later became known by the nickname Pancham. Burman received his early education in West Bengal. His father S. D. Burman was a noted music director in Bollywood, the Mumbai-based Hindi film industry. When he was seventeen years old, R. D. Burman composed his first song, Aye meri topi palat ke aa, which his father used in the film Funtoosh (1956). The tune of the song Sar jo tera chakraaye was also composed by him as a child; his father included it in the soundtrack of Guru Dutt's Pyaasa (1957).

Burman's first released film as an independent music director was Chhote Nawab (1961). When the noted Bollywood comedian Mehmood decided to produce Chhote Nawab, he first approached Burman's father Sachin Dev Burman for the music. However, S. D. Burman declined the offer, advising he was unavailable. At this meeting, Mehmood noticed Rahul playing tabla, and signed him as the music director for Chhote Nawab.

Burman later developed a close association with Mehmood, and made a cameo in Mehmood's Bhoot Bangla.

Burman's first hit film as a film music director was Teesri Manzil (1966). Burman gave credit to lyricist Majrooh Sultanpuri for recommending him to Nasir Hussain, the producer and writer of the film. Vijay Anand also said that he had arranged a music session for Burman before Nasir Hussain. Teesri Manzil had six songs, all of which were written by Majrooh Sultanpuri, and sung by Mohammed Rafi. Four of these were duets with Asha Bhosle, whom Burman later married.

Burman's score for Padosan (1968) was well-received. Meanwhile, he continued to work as his father's assistant for films including Jewel Thief (1967) and Prem Pujari (1970).

Though Burman laid the foundation for numerous Bollywood music directors to pave the path for the future of music in Bollywood cinema, he was awarded a total of only three Filmfare Awards, one of which was awarded posthumously (for 1942: A Love Story).