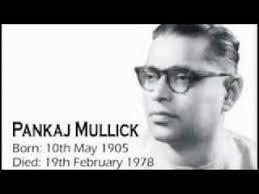 Also known as Pankaj Kumar Mullick (10 May 1905–19 February 1978), was a Bengali Indian music director, who was a pioneer of film music in Bengali cinema and Hindi cinema at the advent of playback singing, as well as an early exponent of Rabindra Sangeet.

Several eminent artistes, luminaries in their own right, including the likes of K. L. Saigal, S. D. Burman, Kanan Devi, Hemant Kumar, Geeta Dutt and Asha Bhosle sang his compositions in films which at times scored heavily at the box office only by virtue of the magic of his musical creations.

Apart from singing and composing music for films, he also featured as an actor in quite a few movies, often in leading roles.

Pankaj Mullick’s involvement with cinema made him a household name not just across the length and breadth of the country but in every nook and cranny of the world where Indian films were watched.

The indelible footprints he left on the bedrock of Indian cinema traced their way back into his life in the form of the prestigious Dada Saheb Phalke Award which symbolized the culmination of his career in films in a manner that has few parallels.

His is a story of humble beginnings, monumental struggles and glorious achievements – achievements that have not only been written in golden words on the pages of the cultural history of India but have been inscribed on the very visage of time, making them truly eternal and everlasting.

He was the one who fought against massive odds and liberated Rabindrasangeet (songs composed by Rabindranath Tagore) from the clutches of the elitists to make them popular among the masses.In the process he earned the sobriquet of The First Man of Rabindrasangeet, an epithet he justified fully through the missionary zeal with which he sang and spread the magic of Tagore’s compositions across the country and the world.

All those lyrics of mine that I will not get the opportunity to set tune to during my lifetime, I leave to you to embellish them with your music.

Pankaj Mullick earned legendary fame and popularity as a singer and teacher of Rabindrasangeet. He devoted his whole life to this cause using the media of the film, the radio and the gramophone – he succeeded in endearing himself to music loving Indians all over the country.