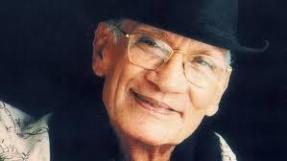 Opee is reported to have commanded the highest fees in the Hindi film music world at the height of his reign as a composer[citation needed]. He was the first Hindi music director to receive 100,000 rupees for his compositions for a film. It was a very substantial sum of money in the 1950s.

His immortal and timeless melodies have often ironed the creases of our stressed lives. Ironically, OP Nayyar’s life was no bed of roses.

After partition, OP moved to Mumbai and after many years of struggle finally landed himself a full-blown project with the film Aasman. Geeta Dutt who was impressed with OP’s unique style while singing for the film introduced OP to her husband, the legendary filmmaker, Guru Dutt for Baaz.

Even as the Guru and Geeta Dutt and OP combination worked wonders for all concerned, Siraj Khan says OP forever felt guilty about Guru Dutt’s untimely death. This is what he shared with Siraj Khan in his inimitable, straightforward style.

“Talking of Guru Dutt, I always feel a pang of guilt. He used to confide his personal problems in me. His wife Geeta and his flame Waheeda, both had deserted him in the end, and he was pretty disturbed. At around two am the same night that he committed suicide, my wife told me, ‘Raj Kapoor has phoned for you. He is saying that Guru Dutt is totally inebriated and is crying inconsolably, repeatedly calling for Nayyar saab!’ I was too tired and sleepy to go. I just told my wife to give some excuse.

I had an appointment with Guru at his residence anyway the next morning at 10.

I reached there the next morning and Abrar Alvi—his dialogue writer told me, ‘Guru has gone.’ Incredulously I asked, ‘Where?’ He said, ‘Guru Dutt is dead! His dead body is inside!’ True to my straight talking nature, I just blasted those two women for ruining Guru’s life—Geeta, right there in front of Guru’s dead body in the drawing room and Waheeda at the time of the funeral!

Opee worked extensively with Geeta Dutt, Asha Bhosle, and Mohammed Rafi, and was instrumental in building their careers.

Some Bollywood observers maintained that Asha Bhosle was his find and that he groomed her specially for his tunes.

Many of his compositions which Asha sang are memorable and have a contemporary flair.

Opee faded from the Bollywood scene in early 1970s, though he made a comeback attempt in the 1990s.