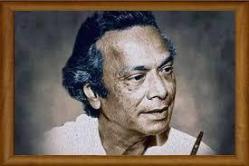 Regarded as a pioneer of Indian music, Naushad Ali was one of the first and foremost composers in the history of Bollywood. Since 1937, he was composing music for films.  He is also known for introducing the legendary singers Lata Mangeshkar and Mohammad Rafi to the world and transfiguring them into the icons they are today.

While he did less than a hundred films during his lifetime, 26 of those films went on to celebrate jubilees, some of them making golden and even diamond jubilees!

In the late 1930s, he came to Bombay to be a success as a musician. But he had to struggle to make it to the top. Initially he faced rebuffs, and had to endure periods of utter deprivation. Naushad even spent nights sleeping on footpaths before he finally secured a job as a pianist in composer Mushtaq Hussain 's orchestra.

Composer Khemchand Prakash took him on as his assistant and taught him, an act for which he remained extremely grateful throughout his life.

Naushad's style was renowned for his ability to incorporate classical rhythms into his symphonies. He based his music upon the "ragas" that formed a basis in Indian classical music, and thus his music took on complex formations and. His taste for classical music was legendary - in the Mughal musical Baiju Bawra (1952), he used actual classical singers to sing his ghazals.

However, both Kumar's and Naushad's days were numbered, and as their films came unstuck at the box-office, their fortunes dwindled. Naushad was still held in high regard, but he was now given mostly period films, most notably the courtesan romance Pakeezah (1972).

However, he still gave his all in his efforts, and he continued composing for films right through to the 1990s.

He received the Dhundiraj Govind Phalke Award in 1981 for his lifetime contribution to Bollywood cinema and in 2004, when Mughal-E-Azam (1960) was re-released in colour, he was on hand along with Dilip Kumar - to attend the premiere and revive their days of glory.

He often spent nights sleeping on the footpath opposite the Broadway theatre in Bombay, and dreamt of seeing his music played over there. Sixteen years later, he burst into tears at the premiere of Baiju Bawra (1952), at that same theatre.