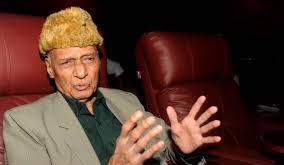 
He was born as Sa'aadat Hussain in undivided Punjab in Rahon, a town in Nawanshahr District which was then the Nawanshahr tehsil of Jalandhar District.

As a boy Khayyam ran away to Delhi to learn music but was forced to return to complete his education. Khayyam then went to Lahore to learn music from the famous Baba Chishti. He was never interested in studies and was always fascinated by the music of Indian cinema. He was inclined to music since a very young age. He often escaped to the city to watch movies.

Khayyam soon ran away to his uncle's house in Delhi, in the hope of becoming an actor. Khayyam's uncle enrolled him in a school, but when he saw his passion for films, he allowed him to learn music, which was actually a step forward in realizing his ambitions. He got his training in music under Pandit Amar Nath. He went to Lahore looking for roles in films.

There he also learned music from famous Baba Chishti who was a famous Panjabi music director. One day Khayyam went to meet Baba Chishti, and after listening to a composition by Chishti sung to him its first part. Impressed, Chishti gave him an offer of joining him as an assistant. Khayyam assisted Chishti for six months and came to Ludhiana in 1943. He was only 17 then.

After a stint in the Army in the Second World War, Khayyam went to Bombay to fulfill his dream. He made his debut as Sharmaji of the Sharmaji-Varmaji composer duo with the movie Heer Ranjha in 1948.

He went solo after his co-composer Rahman Varma went to the newly created Pakistan post partition. One of his earliest breaks was in the film Biwi in which the song "Akele mein wo ghabrate to Honge" sung by Mohammed Rafi was a huge hit. But he gained greater recognition from the film Phir Subha Hogi starring Raj Kapoor and Mala Sinha, in which songs written by Sahir Ludhyanvi and sung by Mukesh and Asha Bhonsle were set to tune by Khayyam, notable amongst them "Wo Subha Kabhi to Aayegi", "Aasman Pe hai Khuda aur Zameen pe Hum" and "Chin-o-Arab Humara".

Khayyam also created music for the Kamal Amrohi directed "Razia Sultan" and his "Aye dil-e-nadan" sung by Lata capturing the mood beautifully. One of popular song is Cho lene do.

Khayyam was still to deliver his best and the opportunity came in Muzaffar Ali's Umrao Jaan in 1981. He made Asha Bhonsle sing songs which are indisputably her best. "In Aankhon ki masti ke", "Ye Kya Jagah hai doston" and "Dil Cheez kya hai" are evergreen.

On his 89th birthday, Khayyam announced the formation of a charitable trust — Khayyam Jagjeet Kaur KPG Charitable Trust — and decided to donate his entire wealth to the trust to support budding artists and technicians in India.