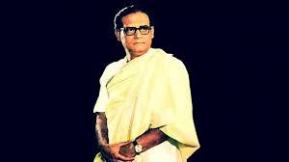 
Under the influence of his friend Subhas Mukhopadhyay, Hemanta recorded his first song for All India Radio in 1933. The first line of the song was Amar Ganete Ele Nabarupi Chirantanii.
Hemanta's music career was primarily mentored by the Bengali musician, Sailesh Duttagupta.
In an interview on television in the early 1980s, Hemanta had mentioned that he had also received classical music training from Ustad Faiyaz Khan, but his tutelage was cut short by Ustad's untimely death. In 1937,
Hemanta cut his first gramophone disc under the Columbia label. The songs (non-film) on this disc were Janite Jadi Go Tumi and Balo Go Balo More whose lyrics were by Naresh Bhattacharya and music was composed by Sailesh Duttagupta.
Thereafter, every year Hemanta continued to record non-film discs for the Gramophone Company of India (GCI) till 1984.
His first Hindi songs were Kitana Dukh Bhulaya Tumne and O Preet Nibhanewali, released in 1940 under GCI's Columbia label. Music for tor this film was scored by Hariprasanna Das.
Hemanta's first compositions for himself were the Bengali non-film songsKatha Kayonako Shudhu Shono and Amar Biraha Akashe Priya in 1944. Lyrics of these two songs were by Amiya Bagchi.
His first Hindi film songs were in Meenakshi (1942) Hemanta is considered a foremost exponent of Rabindrasangeet. His first recorded Rabindrasangeet was in the Bengali film Priya Bandhabi (1944). The song was Pather Sesh Kothaye. He recorded his first non-film Rabindrasangeet disc in 1944 under the Columbia label. The songs were Aamar Aar Habe Na Deri and Keno Pantha E Chanchalata.
His first movie as a music director was the Bengali film Abhiyatri in 1947. Although many of the songs Hemanta recorded during this time received critical acclaim, major commercial success eluded him until 1947.
Some contemporary male singers of Hemanta in Bengali around that period were Jaganmay Mitra, Robin Majumdar, Satya Chowdhury, Dhananjay Bhattacharya, Sudhirlal Chakraborty, Bechu Dutta, and Talat Mahmood.
By the mid-1950s, Hemanta had consolidated his position as a prominent singer and composer. In Bengal, he was one of the foremost exponents of Rabindrasangeet and perhaps the most sought after male singer. In a ceremony organised by Hemanta Mukhopadhyay to honour Debabrata Biswas (1911–1980), the legendary Rabindrasangeet exponent, in Calcutta in March 1980, Debabrata Biswas unhesitatingly mentioned Hemanta as "the second hero" to popularise Rabindrasangeet, the first being none other than the legendary Pankaj Kumar Mallick.
In Mumbai, along with playback singing, Hemanta also carved a niche as a composer. He composed music for a Hindi film called Nagin (1954) which became a major success owing largely to its music. Songs of Nagin remained chart-toppers continuously for two years and culminated in Hemant receiving the prestigious Filmfare Best Music Director Award in 1955. The very same year, he scored music for a Bengali movie called Shapmochan in which he also played back four songs for the Bengali actor Uttam Kumar. This started a long partnership between Hemant and Uttam as a playback singer-actor pair. They were the most popular singer-actor duo in Bengali Cinema over the next decade.
In the latter part of the 1950s, Hemanta composed music and sang for several Bengali and Hindi films, recorded several Rabindrasangeets and Bengali non-film songs. Almost all of these, especially his Bengali songs became very popular. This period can be termed as the zenith of his career and lasted for almost a decade.
He sang songs composed by the major music directors in Bengal such as Nachiketa Ghosh, Robin Chatterjee, and Salil Chowdhury. Some of the notable films Hemanta himself composed music for during this period include Harano Sur, Marutirtha Hinglaj, Neel Akasher Neechey, Lukochuri, Swaralipi, Deep Jwele Jaai, Shesh Parjanta, Kuhak, Dui Bhai, and Saptapadi in Bengali, and, Jagriti and Ek Hi Raasta in Hindi.
In 1987, he was nominated for Padmabhushan which he refused politely, having already turned down the offer to receive Padmashree in the 1970s.
In this year, he was publicly felicitated in Netaji Indoor Stadium in Calcutta for completing 50 years in musical journey, where, Lata Mangeshkar presented him with the memento on behalf of his fans and admirers.
Despite his aging voice, he became the Best Male Singer in 1988 for his rendition in the film "Lalan Fakir".
In September 1989, he traveled to Dhaka, Bangladesh to receive the Michael Madhusudan Award. He performed a concert in Dhaka as well.
Immediately after returning from this trip, he suffered a major heart attack (myocardial infarction) on September 26 and died at 11:15 pm in a nursing home in South Calcutta.
Interestingly, even nearly two decades after his death, Gramophone Company of India releases at least one album by him every year, repackaging his older songs, because of the commercial viability of his songs.
His legacy still lives on through the numerous songs he has recorded, the music he has composed and through many male singers in Bengal and the rest of India who continue to imitate his singing style.