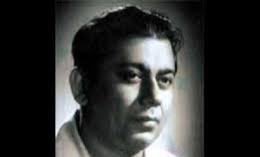 
Chitragupt Srivastav, better known as Chitragupt, was born in Karmaini, Bihar in 1917, and due to his experience in the Hindu heartland, most of his tunes had the fragrance of folk songs. Besides as he was a lecturer in Patna, his academic brilliance did blend with his musical excellence which was given expression by Rafi. Rafi’s song “Chaand Jane Kahan Kho Gaya” in the film Mai Chup Rahungi, composed by Chitragupt, written by Rajinder Kishan, and picturized on Sunil Dutt and Meena Kumari showed the use of light music as well from Chitragupt. Chitragupt gave very melodious tunes in the 50s and 60s and as most of his songs were sung by the legend of legends Mohd Rafi, the songs became immortal after creation. Rafi’s song “Chal ur JA re Panchi” composed by Chitragupt in the film Bhabi brought tears in the years of numerous viewers. Rafi used his emotions towards the fulfillment of the literary value of the song and Balraj Sahani’s lips in the song also require special mention.
Rafi’s song “itni nazuk na bano” in the film Vaasna composed by Chitragupt created a very romantic appeal. Also Rafi’s song “yeh parbaton ke dayre” became a big hit in the late 50s.
Besides the songs of Rafi “chupakar meri aankhon ko” and “chali chali re patang” in the film, Bhabhi were very impressive.
Chitragupt’s compositions in a somber mood for Rafi had a great impact.
One example is “mujhe dard-e-dil ka pata na tha” from the film Akash Deep. The song “raste me hai tere kab se khare” sung by Rafi and Lata in the film Opera House require special mention.
Although Chitragupt gave landmark music in films like Oonche Log,Ganga Ki Lehre, Zabak, Bada Aadmi, etc., he did not get recognition during the golden age due to the dominance of Shankar Jaikishan, Naushad, Roshan, and others, and may be due to his composition of music in less significant films.
He hardly got an opportunity to compose music in big banners like RK or Navketan, otherwise, his contribution was very grand during the golden age.

Rafi’s songs composed by Chitragupt should be restored and revisited.