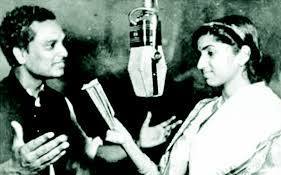 Anil Biswas first made name in Kolkata in the early 1930s, composing music for plays, later he joined 'Rangmahal Theatre', Kolkata, as an actor, singer, and assistant music director, 1932–34, during this period he sang and acted in several commercial stage productions.
By this time he had masters singing styles like, khayal, thumri and dadra, and had become an accomplished singer of devotional music, inShyama Sangeet and Kirtan styles. He also worked as a singer, lyricist and composer, with the 'Hindustan Recording Company', where Kundan Lal Saigal and Sachin Dev Burman, before migrating to Bombay themselves.
He got assignments from renowned Bengali poet, Kazi Nazrul Islam, all this got him into the notice of music director, Hiren Bose, and at whose behest he made his way to Bombay (Mumbai) in 1934.
This was the period, when playback singing, was making its debut in Indian cinema, when Anil first joined Ram Daryani's, 'Eastern Art Syndicate', and was associated in composing music for 'Baal Hatya' and 'Bharat ki Beti', before making his debut as a film composer, with Dharam ki Devi (1935) for which he composed the background music, and also acted and sang the song, Kuch Bhi Nahin Bharosa..
In 1936 he joined 'Sagar Movietones' as a composer, first starting with assisting composers, Ashok Ghosh in films Manmohan and Deccan Queen and also Pransukh Nayak, and continued with Sagar Movietones, even after it merged with the Yusuf Fazalbhoy of RCA’s newly established National Studios in 1939. In the coming two years he did eleven films, mostly stunt films, until Mehboob Khan's Jagirdar (1937), a commercially hit, established him as a musical force in the film industry, there was no turning back from then on.
Soon many more independent assignments came his way, most notably, 300 Days and After, Gramophone Singer, Hum Tum Aur Woh, Ek Hi Rasta, and Mehboob Khan's Watan (1938),Alibaba (1940), the classic, Aurat (1940), Bahen (1941), before working with him again, in Roti (1942), for which he also credited with the story and concept, and which featured many songs by film's actress, Akhtaribai Faizabadi (Begum Akhtar), though they were deleted due to a contractual conflict (the music was recorded with HMV, while she was in contract with Megaphone Gramophone Company).
In following years he gave scores for Bombay Talkies films like Jwar Bhatta (1944), Dilip Kumar’s debut film, and Milan (1947) also starring Dilip Kumar and directed by Nitin Bose, who made it in Bengali, asNaukadubi. He gave break to famed playback singer, Mukesh in Pehli Nazar (1945), singing 'Dil Jalta Hai to Jalne De', and to Talat Mahmood in Arzoo (1949), singing 'Aye Dil Mujhe Aisi Jagah Ley Chal' his first song in Bombay; he was also behind the success of many singers such as Surendranath, Parul Ghosh, Amirbai Karnataki, Lata Mangeshkar, and Roshan Ara Begum.
It was during his period that he married Asha Lata, an actress with Sagar Movietones under her maiden name Mehrunnisa who continued to act under the name Ashalata Biswas, and had three sons and a daughter, the couple later divorced.
Later it was the death of his son Pradeep in an aeroplane accident, in 1961, which catapulted his exit from the film industry.
In 1942, he joined Bombay Talkies at an offer from Devika Rani, where he got his biggest hit, Gyan Mukherjee's Kismet (1943), starring Ashok Kumar and Mumtaz Shanti, most remembered for the song, 'Papihaare', sung by his sister Parul Ghosh (wife of the renowned flautist, Pannalal Ghosh), the patriotic hit, 'Door hato ai duniyaa waalo', and 'Dheere dheere aare badal, mera bulbul so raha hai, shorgul na macha' sung by the actor, Ashok Kumar.
In 1946, he left Bombay Talkies and set out as a freelancer, and later under the banner, ‘Variety Pictures’ owned by his wife, AshaLata Biswas, worked for four films, Laadli (1949), Laajawaab (1950), Badi Bahu (1951) and Humdard (1953), with KA Abbas Rahi (1952), songless Munna (1954), where he gave the background score, and Indo-Russian joint production,Nargis starrer, Pardesi (1957) and Char Dil Char Rahein (1959).
By now, the kind of music perfect by Anilda, as he was now called in the industry as, was fast changing, and so he gradually grew disillusioned by the changing dynamics of the film industry.
In early 1960s, he retired from the cinema, while still at the peak of his game, he shifted base to New Delhi, though he did one or two films in between like Mahesh Kaul's, Sautela Bhai (1962), his final film as a composer was, actor Motilal's directorial venture, Chhoti Chhoti Baatein (1965), starring Nadira and with Mukesh's 'Zindagi Khwab Hai Tha Hamein Bhi', unfortunately Motilal died before its release, and the film flopped at the box office, though it did get a National Film Award.
In Delhi he became director of the National Orchestra at the All India Radio (AIR) in March 1963, and remained Chief Producer -Sugam Sangeet (light Hindustani classical music) at AIR, Delhi till 1975.
Though later, he composed music for Doordarshan's pioneering TV series Hum Log (1984) and a number of documentaries for the Films Division as late as 1991, and remained the vice chancellor ofJawaharlal Nehru University for 2 years.
He won the Sangeet Natak Akademi Award in 1986.
He was first married to Ashalata (real name Mehrunnisa), an actress in 1940s, who also owned Variety Pictures, and with whom he had three sons and a daughter.
Daughter's name is Shikha Vohra and her daughter is now a well-known documentary film maker, Paromita Vohra.
After that Anil Biwas married the playback singer, Meena Kapoor, daughter of actor Bikram Kapoor, in 1959. Meena was most noted for singing hit 1950s songs like, ‘Rasiya re man basiya re’ in Nargis starrer Pardesi (1957) and ‘Kachhi hai umariya’ picturised on Meena Kumari in Char Dil Char Raahein. Upon his death, the then Prime Minister of India, Atal Bihari Vajpayee called him, “a doyen of film music who struck the rare balance between classical purity of music and popular pulse”, and credited him for leaving, “an enduring legacy as he introduced many talented singers and innovations to the Indian film music”.